Today just under 10% of the state’s population is employed in agriculture, but compared to the nation that is quite a high number. Of course with only 3 states having a smaller population density and 90% of the state’s land area is dedicated to farming 10% might seem low to some.

Before the year 2000 North Dakota had seen a stagnant, or decrease in its population, 5 out of the previous 7 decades. After the 2000 census, North Dakota, along with Connecticut & Rhode Island, were the only states to have a decline in population.

However in a worst to first scenario, North Dakota is currently the fastest growing state in the country. Fueled mainly by an oil drilling boom, the state has grown by 7.5% since 2000. Though many believe this will be short lived. And with most new citizens living in temporary housing while they work on oil rigs, the impact on small rural towns might be localized to certain areas, if at all.

Video
Fly Over Country - The Dakotas 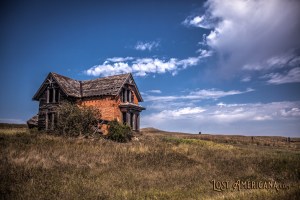 April 11, 2017 / Vincent D. Johnson
Since 1990 These Counties Are The Hardest Hit By Population Decline In Their State The 1990s are a significant time for Lost Americana, which goes beyond the fact that during that decade
Read More
« Prev12Next »