Also known as the Wheat State, it is by far one of my favorite states to photograph.

I love traveling here partially because I feel there is something special about the state and its history. I feel the same pull to go there, a lot of early settlers must have felt on their way to start their own farms. It’s in the middle of the country and truly has an American feel about it. Heck, even Superman was attracted to this state.

Sadly it’s also a favorite because it is so easy to find farms and towns that are all but empty. According to Wikipedia, 89% of towns in Kansas have a population smaller than 3,000 residents.

It’s has been estimated that there are  defunct towns in the in the thousands spread across the state. How many of them were no more than fledgling settlements that never got off the ground, is unknown, a great number of them still dot the landscape. With over 600 unincorporated communities and another 300 plus ghost tows, it’s not hard to find some places that are a shell of their former selves. While maybe not a true “ghost town”, as in a place where no one lives anymore, Kansas has quite a list of places that at some point had a commercial, or population center but now are either abandoned, or sparely populated. (The List). Watch the videos below of, one a drive through and the other a fly over two such towns.

Like most states with a large agriculture base, modernization and large scale, or corporate farming decreased the number of farmers needed and hence the jobs that supported a community of farmers. The situation in Kansas may be more extreme than other states, but its situation could still be a possible sign of things still to come for other states with less cities spread across the state.

Video
A Drive Through A Town With No Name

March 4, 2021 / Vincent D. Johnson
In the middle of Western Kansas farmland in Gove County sits Monument Rocks, a chalk formation that peaks out of ground creating a strange landscape in this otherwise flat area,
Read More 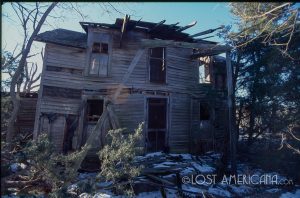 A Rare Find In Rural Kansas

March 9, 2019 / Vincent D. Johnson
Untouched for decades, I find less & less places like this each year Since I started traveling across rural America in 1995 I have always been in awe when I
Read More
« Prev1234Next »