Idaho has been one of the fast growing states, percentage wise, in the country since 2000. With a 2.1% increase from 2018 to 2019 alone, it has out paced the next closet states by almost a half percent.

Yet, Idaho like many states with large swaths of rural areas, Idaho has seen 90% of that growth concentrated in urban areas. The numbers in those rural areas show a similar story with other states: an aging population and a shrinking job market. As of 2019, a full decade plus since the recession, Idaho’s rural jobs numbers have returned to per-recession levels.

In a 2018 report put out by the Idaho Department of Labor, titled “The Future of Rural Idaho”, the opening summary flat out says “Rural Idaho  runs  the risk of a feedback loop linking demographic transformation  and economic decline… As  these young workers leave and are replaced by retirees, the economic stagnation  of  rural  Idaho will  continue,  and  even  escalate… This accelerating cycle of demographic aging and  economic contraction  threatens  the  viability of Idaho’s  rural  economies,  and  suggests  the  necessity  of  proactive  measures  to  recruit  and  retain  young  and  working age residents.”

Idaho is not the only state to be facing this exact same scenario. And one can speculate that the time to act passed in the 1990s. 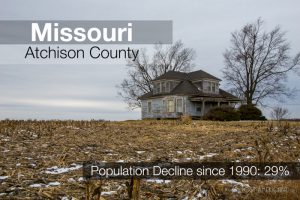